On Wednesday 12th September 2007, V/Line unveiled their new colour scheme and a refitted H set and Sprinter railcar at a ministerial and media launch held at Southern Cross Station.

Attended by invited V/Line, Department of Infrastructure and EDI Rail, along with invited guests and the Minister for Public Transport, Ms. Lynne Kosky, the launch proceedings took place between 11:30 and 12:00.

Staff and guests were invited to walk through and look at the refurbished interiors of both sprinter 7007 and four car H set FSH25.

Prior to the launch, 7007 and FSH25 were transferred to Southern Cross ex Newport Workshops:

Unlike previous launches and unveilings, no speeches were given; however, Ms. Kosky spoke to WIN News who had exclusive rights to the launch.

Platforms 3 and 4 were closed during the time of the launch, with the general public unable to access them – the Collins Street and Bourke Street bridge entrances being guarded.

Following the launch, 7007 departed for EDI Rail’s West Melbourne Depot at 12:33, and a special train consisting of N453+FSH25 for invited V/Line staff and guests ran to Sunbury and back. Times for this special are listed below:-

At Sunbury, the trains eight passengers disembarked with N453 taking FSH25 into the sidings to run around at 13:16. Once the run around was completed, the train returned into Platform 2 at 13:24.

Local media, believed to be from the local Advertiser newspaper, took the opportunity to take photographs of the train and ask passengers waiting on the platform their opinion of the new colour scheme.

The train made an early departure back for Southern Cross at 13:34

Upon arrival into Southern Cross, Y129 coupled up to FSH25 and departed for the Pass. Yard at 14:32.

V/LineCars.com would like to thank V/Line for the invite to this event.

Launch of the new livery 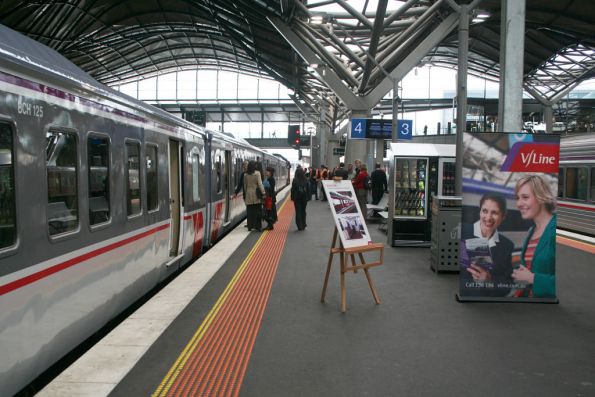 Sprinter 7007 and carriage set FSH25 at the launch 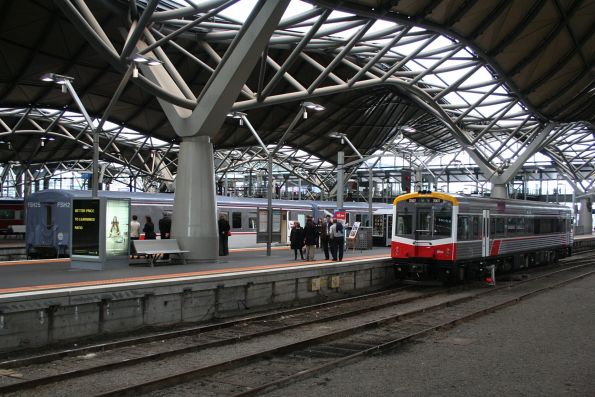