Maintenance of the V/Line fleet of trains is contracted to Bombardier. Their main facility is the Carriage Maintenance Depot on Dudley Street at West Melbourne. It was opened by V/line in 1989, replacing a deteriorating series of carriage sheds. 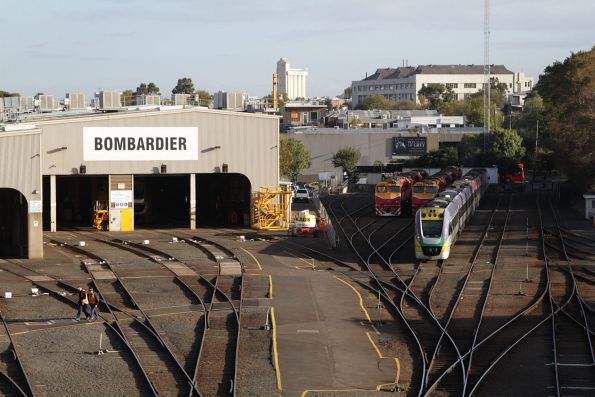 With VLocity and Sprinter trains services inside the sheds, along with locomotive hauled carriages. 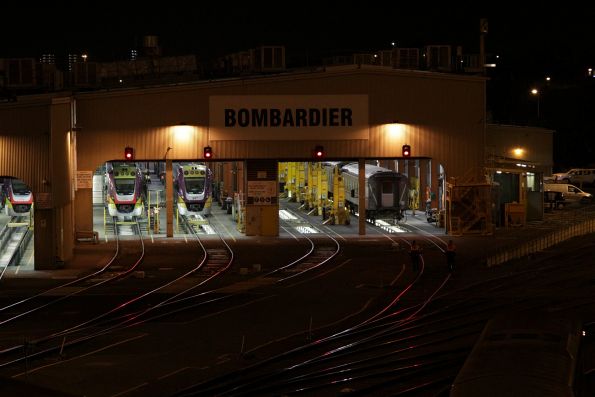 Bombardier also has a lease over the South Dynon workshops, for the servicing of the standard gauge fleet. Along with the fuel point, for the servicing and refuelling of locomotives. 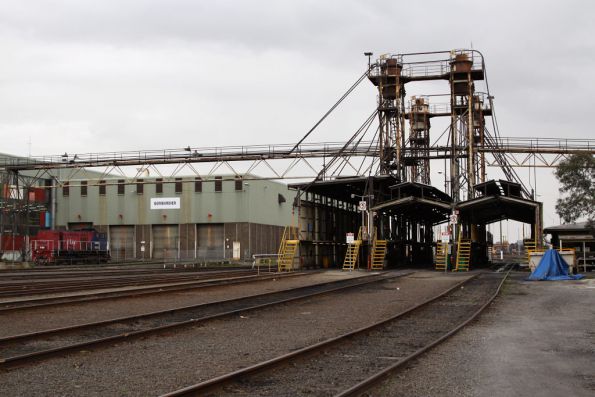 VLocity trains are maintained at a $16.5 million facility opened at Ballarat East in February 2012. 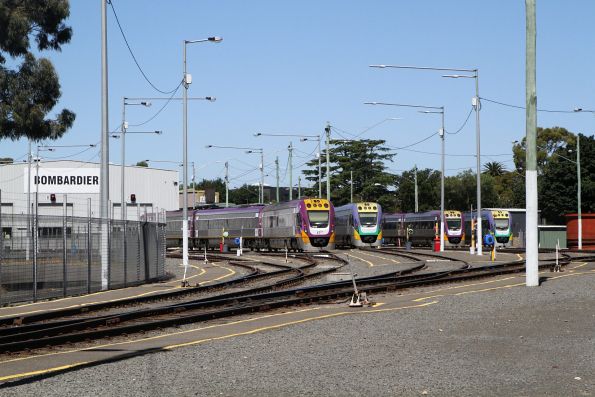 Diesel locomotives receive light maintenance at the Geelong locomotive depot, with the facility upgraded in recent years to also cater to VLocity and Sprinter DMUs. 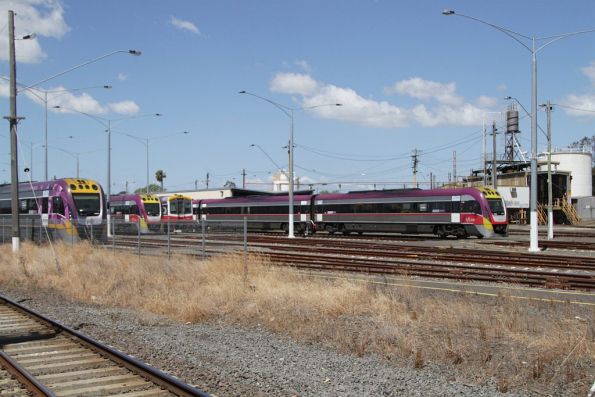 Since 2017 maintenance of V/Line’s carriage fleet has also been subcontracted to the Bendigo Railway Workshops, operated by Southern Shorthaul Railroad. 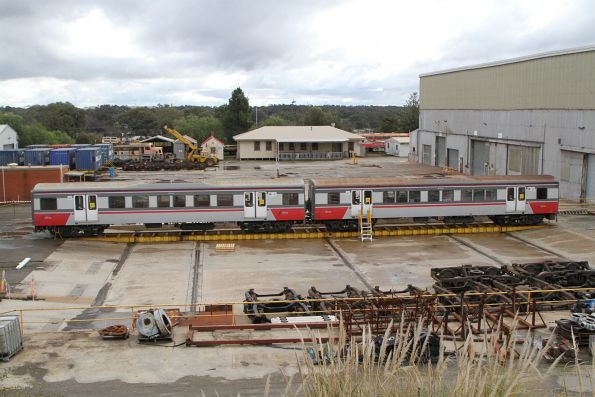 Downer EDI Rail once held the maintenance contract for V/Line’s fleet of Sprinter DMUs, carriages and diesel locomotives. VLocity trains were maintained by Bombardier at Dandenong. 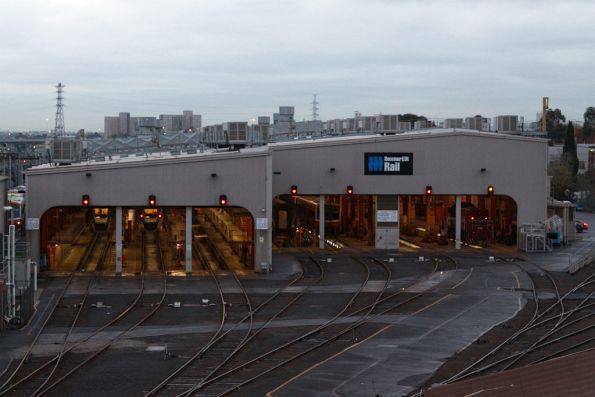 With Newport Workshops ‘West Block’ used for heavy repairs to carriages and locomotives. V/Line fleet to be maintained by Bombardier

Global train maintenance expertise will be brought to the entire V/Line fleet with the appointment of transport company Bombardier to improve train reliability.

Bombardier is now responsible for the maintenance, repairs and management of the V/Line ‘classic fleet’ which includes Sprinters, locomotives, and locomotive-hauled carriages.

Premier John Brumby said Bombardier was continuing its construction of the VLocity fleet, which they had also maintained since the first carriage rolled out in 2005.

“Our Government is determined to support families living and working in regional and rural Victoria and we understand how important high-quality transport connections are to their liveability and prosperity,” Mr Brumby said.

“We also understand that nothing is more important to Victorian families than job security and that’s why we are investing in job-securing projects like new trains for our regional rail network.

“The appointment of Bombardier to maintain these V/Line trains brings the maintenance of all regional trains under the one banner for the first time.

“Bombardier employs more than 500 people across Australia and has almost 350 employees alone in Victoria, with its major maintenance base located in West Melbourne.

“The maintenance facility operates 24 hours a day, seven days a week and is an example of the successful manufacturing industry and rail maintenance operators we have in Victoria.”

The Victorian Government has ordered 134 VLocity carriages for the regional rail network with 107 in service and all carriages expected to be rolled-out by October 2011, adding an extra 9760 seats and almost doubling the total number of seats on the network since 1999.

Minister for Public Transport Martin Pakula said the Bombardier new maintenance arrangement would means all maintenance for every V/Line train was carried out by the one company.

“V/Line customers might not notice improvements immediately, but we are confident that will happen once Bombardier has bedded down their systems,” Mr Pakula said.

“These investments are part of the Brumby Labor Government’s commitment to investing in regional public transport projects that improve services, accessibility and connectivity for families living and working in regional Victoria.

“These investments are also providing Bombardier employees with job security and importantly delivering security for hundreds of people in Bombardier’s local supply chain which includes more than 90 Victorian businesses.”

Bombardier was awarded the maintenance contract after a tender process. This started in July and will run until the end of 2012.

The Bombardier facility at Ballarat was built in 2011 to handle the ever increasing fleet of VLocity trains.

Ballarat will benefit from up to 30 new jobs created by a new V/Line train maintenance facility announced yesterday by the state government.

Visiting the Ballarat East construction site yesterday, Minister for Regional Cities Dr Denis Napthine said the $16.5 million project would also lead to better rail services for commuters. The new three-track maintenance facility is expected to be completed by the end of the year and will allow V/Line to service trains overnight in Ballarat for the first time. It will be run by international rail company Bombardier.

Dr Napthine said the announcement was good news for Ballarat and western Victoria. “V/Line and Bombardier are confident that the Ballarat workforce includes people with the skills required to work at this new facility and will be looking to fill these new positions with local people,” Dr Napthine said. “As the Coalition government continues to re-open railway stations in country Victoria and with our commitment to the Regional Rail Link, more jobs will continue to open up in this sector,” Dr Napthine said.

Dr Napthine said V/Line was already one of the bigger employers in Ballarat, with 107 staff directly employed by the authority and about 40 more employed indirectly through train and station cleaning and maintenance contracts. He said the government was open to the possibility of more jobs coming to Ballarat as needs demanded. V/Line plans to accommodate a number of current staff who commute to Melbourne from Ballarat.

The expansion comes as part of a long-term strategy to move VLocity train maintenance operations from Melbourne to major regional areas, including Ballarat and Geelong. Member for Ballarat West Sharon Knight said new job opportunities were needed in the region. “I welcome any jobs that come to Ballarat and congratulate the Government in following Labor’s lead in creating regional employment,” said Ms Knight.